What Came First, the Demo or the Sale?

Production companies have varying philosophies when it comes to promotion. But Ric and I agreed, in the first month of our new venture, that we were going to have to have something to show potential customers.

We had produced a successful show at Marquette, as detailed previously, but it was a show for insiders and would be meaningless to potential business customers.

So Ric decided to lean on his father, industrialist William J. Sorgel, who had run the Sorgel Transformer Company founded by his own father, for leads and contacts. “Million Dollar” Bill, as I liked to call him, was a charmer, had a lot of friends, was a hell of a salesman, and was willing to spread our name among his other millionaire industrialist friends. (He spread his own name with an enormous company logo on the roof of his Walker’s Point plant that was seen by anyone entering or leaving Milwaukee on I-94).

To Sell a Creative Product, You Need a Sample

Our real goal was not the sale itself, or the profit that would come with it. What we really wanted was an industrial-strength demo. The result, finally, was Kiefer Corporation…. Our first “real” show.

Mike Koeper was a friend of Ric’s; his father, Fred, was a friend of Bill’s. They had purchased half of Kiefer Corporation — an industrial stainless steel fabrication company — from Ed Stamm, the President of the company, and brother of Milwaukee’s fire chief.

The Koeper’s had retained an ad agency — Andrews Advertising, located in the Bockl Building at 20th and Wisconsin. The Account Team on the Kiefer Account was Lyle Thompson, a well-known ad veteran, and Mark McGlinchey, an up-and-coming Account Exec. I can imagine they thought the Koepers were nuts for bringing in this wild-looking duo with the slide projectors.

Ric and I dressed up as best we could (I wore my tan corduroy jacket from my honeymoon) and dragged our gear over to 20th and Clybourn, the HQ for Kiefer Corp. There we met the Koepers, Ed Stamm, and the ad boys. Lyle Thompson was quick to point out their recent marketing advance for Kiefer — a new outdoor electrical building sign.

We began our pitch — if memory serves, a bunch of mumbo-jumbo about slide projectors, twin-dissolves, and soundtracks. Finally, we showed the show — our Marquette University triumph.

Our first rough crowd… Ed Stamm excused himself to take a nap (seriously).

But after it was over, Thompson asked, “how much?” He knew this was coming out of his budget. We fumbled around for an answer. Before we could say anything that made sense, he interjected; “we really don’t have the money for it”. McGlinchey added, “Might be good for their trade show, though”.

I waited for Ric’s answer. He was more familiar with money than me.

We had our first job.

It was early March and our first job was due to be shown in Kiefer’s booth at the Wisconsin Restaurateur’s Association Expo at the Red Carpet Inn near the Airport. This expo featured restaurant supplies, cooking equipment, and other fast-food-oriented products and services.

On $125 bucks, we had to buy film, audiotape, and drive around Wisconsin photographing Kiefer Corp’s best stainless steel kitchen installations — in hospitals, cafeterias, and more hospitals, and also document their whole fabrication story.

We did the shooting first. Ric and I headed out to each of the installations, treating each shooting trip as script research as well. I took notes, recorded ambient sound, and Ric shot a fair amount of footage (using the one rule we had learned in college — bracket like hell.)

Once we had all the shots, I wrote a script. This would not be easy.

I never found scriptwriting easy. It’s low overhead activity, and doesn’t require film or processing or much equipment, but it does require a great deal of time and intensity. And if you’re writing for a-v, it requires an understanding of all the a-v elements.

This first script was REAL low overhead. I wrote it in the apartment my wife and I had on Cass Street, on my high school/college ROYAL typewriter… a real piece of crap. Actually, as I type this now, I faintly remember handwriting out much of the first script. That helped me keep it short. But not short enough. Mark McGlinchey offered me a pamphlet on the “FOGG INDEX” — a technique to keep writing simple. Years later, I found this letter I wrote Mark in an unmailed manila envelope along with the booklet I promised to return. Obviously, I still have both. But thanks, Mark.

What really helped in writing the script, though, was the fact that I was going to READ it. We didn’t know any pros, there was no real A-V industry at the time (it was really a film industry, if anything, and I was too chicken — and we couldn’t afford — to hire an announcer.

So, knowing I was going to read what I wrote, I wrote out loud. And I decided that what would make this script readable was if it would work for Ed McMahon.

Ed, at the time, was not just Johnny’s sidekick. He was also the king of the voiceovers, doing spots for Bud, Alpo, and who knows what else. I was always more attached to the audio than anything else, and I had done voice impressions in high school. I was going to sound like Ed McMahon.

“In stainless steel fabrication…. And installation….

All you’ll ever need.

This… is Kiefer Corporation”.

MUSIC UP AND UNDER

Note the dot-dot-dots. Those solve many problems for scriptwriters. They indicate pacing, and excuse the lack of verbs. It helps the announcer read what was in your head.

I read the script in a closet on Cass Street. We had a two-room plus kitchenette apartment, with one closet, that seemed large enough to have been an elevator shaft at one time. All of our meager possessions were in that closet. And, since it was still winter in Milwaukee, we had plenty of heavy coats and sweaters. Instant audio booth.

I knew that to sound professional, I’d need help. I was no announcer. So I “sweetened” the entire track with music… music selected from soundtrack albums of movies I had liked in college. Midnight Cowboy. On her Majesty’s Secret Service. Skidoo. I liked John Barry.

There was no section in the show without music, and every time the subject changed the music changed. It enhanced my read, and begat a rule I still obey to this day.

With plenty of Olsen Electronics leader on the tape, I created the multitrack on Ric’s large Sony Selectrosound overdubbing recorder, mixing down to my own Sony two-track.

I brought the tape and the recorder to Ric’s apartment, where he was using a fluorescent light fixture as a light table, a pair of his Dad’s slide projectors (yes, he had two) and our rented Kodak dissolve box.

We carefully laid out the slides according to the track. In places where there was a bit more music, we added slides to fill (creating sequences that we claimed were pre-planned).

By the time the Kiefer booth opened at the Expo Center, we had a show.

Our biggest memory of that Restauranter’s Expo show was the fact that the air dripped from deep-fry machine oil samples. We brought our significant others to see the show and eat.

With a demo that seemed fairly professional now available to us, we took what little money was leftover, worked out a time-purchase of the two slide projectors from “million-dollar Bill”, and bought a used dissolve control outright. Bill Sorgel even hosted an open house for us at the Grafton Hotel Washington. Soon we had a number of sales calls, and as predicted, those that liked what they saw bought our services — — to produce pretty much exactly the same thing.

We had landed three of our two-projector “industrial” slide shows for Gilman in Grafton, Milwaukee Valve in South Milwaukee, and RipSteel in Milwaukee.

It was beginning to look like we’d have a full plate for the rest of the summer, so we decided to get an office. For $125 a month, we took over space from the company that developed our slides. Heck, we were on our way to a $5000 year!

The demo got us business. The office made us real. And only one name per business card! 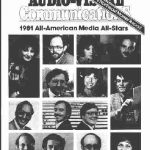 My Life in Multi-Image: Sorgel-Lee, Part 2

My Life in Multi-Image: Sorgel-Lee, Part 4