From Multi-Media to Multi-Image

We built our business on slides. We matured it on video and film. We broke it wide open on multi-image.If you said “multi-image” to a client in ’77 or ’78, they wouldn’t have had a clue. What they saw was amazing, but they’d call it “films”, slide-talks”, “videos”… almost anything except its christened name.Multi-image was named by a bunch of professors in Pennsylvania who started an organization to study and promulgate it — the Association for Multi-Image International, or AMI. It didn’t take long for those who were actually making a living with it to take that organization over and make multi-image less a discipline and more a form of rock and roll.The professors had been wowed by the big multimedia shows they saw at the various 1960s world’s fairs. A dozen or more slide projectors, timed to music, clicking on and off, dissolving, and very often controlled in real-time by human beings. They brought what they saw back home, and “multimedia” as it was then called (Sorgel-Lee Riordan began as “Sorgel-Lee Multimedia”) soon found its way into places of permanent exhibition — Art galleries and Museums — where there wasn’t all that much at risk.

Multi-image was born when the risk was reduced. A number of companies tried their hand at making machinery to control slide projectors. Some were successful in the early and mid-seventies. We used their gear (primarily a company named Spindler & Sauppe) to control twin dissolve shows.

But it took a gentleman named Charles Kappenman — a consulting engineer near the Jersey Shore — to see the real possibilities in a more advanced form of control. Chuck — working on contract for a company trying to make slide controllers — saw an audience react to the pizzazz they saw on the screen. It was show biz. It was magic. It was, suddenly, a business. AVL. Audio-Visual Labs.

Chuck started AVL, and along with a partner, Ed McTighe, built and sold machines that used an evolving series of arcane devices to make sure that the various slide images appeared where they were supposed to, at the right time, relatively close to the beat of the music.

At first, they used tone signals on an audiotape. Then they added a form of computerization — punch tape. You actually had to punch holes in a paper tape that ratcheted through their controller telling their various “dissolve units” what slides should be up and what light bulbs should turn on.

Finally, they took the ultimate step — a dedicated computer.

Now, this was before Apple or IBM or Commodore. Their first units had dedicated buttons for the various functions — “quick cut”, “1-second dissolve”, “flash”. But the net result was that — put in the hands of creative storytellers — a new medium was born.

Chuck’s genius was that he knew he wasn’t selling hardware — he was selling a result. So he encouraged fairly well-known multi-media creative types (no, we weren’t one of those — yet) to try his gear and make a show. He showed the results in his trade show booth at the National Audio-Visual Association annual Exhibition, and producers like us salivated — and bought in. (To be fair, the eventual growth of AVL was the work of many people at AVL, including relatives, friends, and employees, buts that’s another story).

Ric was our multi-image visionary. With a past in Rock and Roll (as a member of “The Destinations”, his college band, A Milwaukee one-hit success story), he loved and lived Rock and Roll. He had, he always said. “The Bone” for it, and I wouldn’t disagree. No one was more rhythmic.

During our post-fire successes, there was enough money to invest in upgrading our space and acquiring new equipment. The M&I bank — impressed by our success and undoubtedly encouraged by our successful emergence from the fire — kicked in a big loan.

Rob bought film equipment. Linda and I got typewriters, and “me and the audio guys” got sound studios. Ric upgraded the camera gear, the copystand, built his world-famous “vertical slide editing system” — and bought into AVL and multi-image — big time.

It became his instrument. Studying the work of those who had produced the AVL demo shows, Ric improved on their techniques — far too detailed to explain here. But imagine if you will (and that’s all you can do, since most of those shows are impossible to reproduce today, and there are very few pictures) — screens three times wider than they were tall, almost constant step animation (usually about 15 frames a second) on multiple areas of the screen, blinding colors, and pulsing sound. And in our case, usually a decent script.

We built a special showroom to show it, and waltzed our current and potential customers through to see it. Our competition was sleeping. We were first, and later, best.

From that point on — in 1977 or so, we constantly upgraded our equipment — the software was not SOFT in those days, it was hardwired into the “computer”. But it seemed worth it. It led to roadshows, meetings, trade show booths — even large stage theatricals — all because of Ric’s dedication to the art form and craft of multi-image.

In the late ’70s, AVL delivered a breakthrough for the slide industry — a computer where software was software — upgrades delivered and transferred on floppy disc. Arcane methods of backup and playback — the pushbuttons, the punch tape, the audiotape, were gone.

With the “Eagle”, reliability increased. The market grew. (This was a big enough revolution that their next product — the Eagle II — would later be spun off as a “personal computer” and compete successfully for a time with the likes of Apple and IBM). We rode this to major shows for Nekoosa Papers, Pabst, Will Ross, Harley-Davidson, Cutler-Hammer, and, later, even AVL itself. (Hmm… what do some of these companies have in common?)

And Ric, himself, was part of the gang that took over that “professor’s club” in Pennsylvania. He took a particularly stunning show we did for Harley-Davidson — “More with the ’80s” — to one of the group’s first awards banquets in Los Angeles. It won a Silver Award, but the buzz we got from it was gold. We were beginning to believe our own PR, and a lot of it was true.

If multi-image had one drawback, it was that it didn’t “distribute” easily — it had to be staged by a crew of people. So, today, I can’t show you many examples (we will run one a few chapters from now). Companies sprung up that “transferred” multi-image to video or film so the shows could be seen without paying a crew to stage them after the big event. This was useless if the show was widescreen, so clients began asking that their shows be constricted to the 3×4 video format so they could later be shown to other audiences.

So why not produce in film or video? Video wasn’t really there economically or technically yet — restricted to broadcast use. Video projectors hadn’t approached affordability or quality of the image. And film was perceived as being too expensive, compared to slides.

We built the business, invested in more slide, graphics, photographic and multi-image specialists, and watched the sizzle sell the steak. Although we continued to produce single tray slide shows, PSA’s, a TV spot or two*, filmstrips, and the occasional film, were rapidly being perceived as a multi-image company — much to some of our chagrin.

I, for one, was concerned. Ah, hell, I was sulking. I didn’t want us to be just a slide or multi-image company. I wanted us to be more. Multi-image was less reliant on the written word, I thought.

I did the only thing I could do. I grew a beard. And had a drink.

* One of my favorites was produced for a local judicial candidate, Pat Curley. She had been appointed to the bench and was in her first “real” election. The Tv spot we produced for her is one of my favorites — it pre-Ken Burns Ken Burns by a few years, and uses for the voiceover an actor (Robert Burr) who you’ll meet in the next chapters. Click Here to see the spot.

My Life in Multi-Image: Sorgel-Lee, Part 7 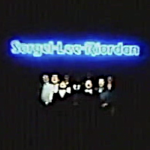