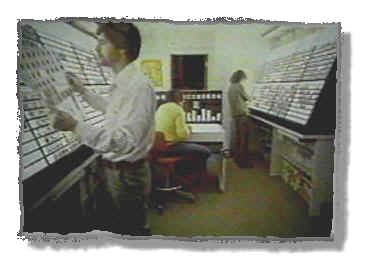 In the early days off S-L-R, when there was little technology to bicker about, the writers ruled the roost. We drove the story, and often the edit. In a class we taught at Marquette, I often ran an old TV spot with the television icon Arthur Godfrey. The point was, that he could sell anything with just a bit of good copy, eye contact, and good delivery. In fact, he sold so much “enzyme active Axion” that the product had to be pulled from the market when it was discovered its phosphates were killing fish.

After the fire, after O’Neill, after a big expansion in our new space, things should have settled down. They didn’t. There was staff turnover, the constant debate over which partner was in charge of what, and money problems. Our core — Ric, Rob, Brien, Linda — was intact, but some old-timers — Steve Lutomski and Greg Latsch — were gone. The newer staff that had been around during O’Neill had been hired because of their abilities in film and video — but they didn’t last when the film and video work didn’t last. The one bright light was a part-timer on the O’Neill project who kept the office running, despite the intramurals — Mary Bryant, who became our office manager — and Den Mother.

After O’Neill, we produced many industrial filmstrips, a film or two, one video, and more and more “multi-image”. Earlier chapters deal with this phenomenon but suffice it to say, like web development or multimedia today, it was the hot app of the late ’70s through the mid ’80s. We produced meeting openers for Schlitz, Pabst, Will Ross, Harley Davidson, Cutler-Hammer, Preway, Nekoosa, and many more. Some of those names no longer exist.

We hadn’t made much of an investment in video, but film was another story. We had a camera, a large Steenbeck editor, and other gear. We were “The Media People”, offering solutions featuring whichever of the audio-visual media best fit the bill. But more often than not, that was slides. Sometime after O’Neill, we had elected Ric President of the company. It was clear someone had to steer the boat, in one direction instead of three. Not soon after, Ric’s medium, multi-image, took off big time. He programmed all the multi-image shows, was identified with the medium nationally and was also running the company. It was a time of great angst for the motion media people.

New hires supported the slide effort, and clearly, this seemed to be the magic bullet. We were investing in the gear to get us there — Marron Carrel animation stands, AVL slide programming/dissolve gear, projection booths, and slide editing areas. Our “sales pit” — a dark room with an overstuffed L-shaped pit couch from Gimbels — was in constant use handling demo traffic, and featured our two-minute show (written by Rob, produced by Ric), a new Harley wide-screen multi-image show, and a show we had produced promoting Milwaukee. It closed a lot of sales.

In an earlier show we produced for Rob’s wedding (a black and white video, by the way), we had joked about the fact that Rob was “missing”. At the end of it, we offered alternative endings, one of which featured Ric and Brien shaking hands and singing “50/50!”, a reference to ownership shares in the company. I had brought Rob into the company in our second year, and it was a wise move. But two creative egos can learn to compromise. There’s a more interesting dynamic with three. Rob was a journalist, Ric a showman, and I was somewhere in between.

Ric and Rob increasingly didn’t get along, and I found myself in the middle. Each of us would take turns crying on Mary Bryant’s shoulder or lobbying Linda, trying to figure out the way to get the company pointed straight ahead. Were we film? Video? Slides? Our overhead was supporting many media, but our income was from one medium.

I tried to ignore the personal issues, but couldn’t ignore the financial and marketing ones: we had to concentrate on something, and slides and multi-image clearly were the winner.

I’ve spent some time in other chapters extolling the credibility Rob’s presence and talent gave our company. It was undeniable — at a time when we were attempting to push two-projector dissolve shows to the muckidimucks of Milwaukee, Rob’s name helped us gain entrance, and his writing was pristine. And when he did have the opportunity to do films, they were exceptional (His Harley-Davidson history film was a masterpiece and a good example of how even a great demo piece like that couldn’t sell films in the changing market). And he was a team player — often getting stuck with the grungier jobs since he had the organizational skills to handle great amounts of facts and data.

But we were on the edge, and no one was budging. We were trying to sustain a presence in three media, and only one was pulling its weight — the new medium of multi-image. Something had to give. We had to shake things up for the health of the company. But Ric was going nowhere, and as a founder of the company, I was determined to stick it out. I was willing to give up video. That left Rob. We offered him a buyout, and he accepted.

Rob became quite successful in corporate communications and public relations. We quickly bit the bullet, tightened our belts, and redirected the company, embracing its past — and its future. We changed the stationary, leaving the hole an unsolved mystery. But to answer the question, no one person was the hole… each of us had been a hole at one time or another. That’s the nature of partnerships.

Now our logo was a slide. 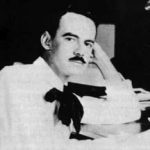 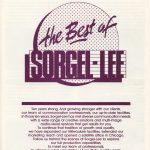 My Life in Multi-Image: Sorgel-Lee, Part 12